As we have mentioned in our previous articles that year 2013 and 2014 are the years of Jupiter. In 2014 the planet Jupiter will be at its exalt starting from 24th April at 10:12:52 in the morning and will remain in the exalt till 1st May at 10:11:41 morning time. In the 2013 the Jupiter Exalt was started from 27 June 2013 Jupiter was elevated in ranks as it enters into the house of Cancer. From 1 September to 7 September Jupiter will be at exalt time. This precious time comes after a period of 12 years. Those who want to achieve success in spirituality can perform certain rituals to obtain mastery. There are many rituals associated with this time period.

Jupiter is the lord of sixth sky. Jupiter represents Sagittarius and Pisces. It is also the ruler of Thursday.

This is rare moment to perform rituals and make different amulets and talisman to bring wealth, luck and prosperity in life.

We are presenting here a world famous talisman which is written by Kaash Al Barni. If you wish to make this talisman for yourself then you must follow some instructions. If you perform all the steps correctly then you will have a magical tool in your hand that will make you rich, famous, lucky and will remove every obstacles and nothing will stop you to have a luxurious life.

After 27 June 2013 select a time period in which you can perform these rituals easily.

In second step you have to recite Astaghfar for 1,25000 times. You can complete this recitation in number of days which are easy for you.

We now present two talismans. One is a general talisman and the second one is special talisman which will work only for a particular person for whom this talisman has been made.

Those who do not posses knowledge of talisman making must follow our procedure. The talisman will be made whenever you find the hour of Jupiter. Please keep in hand all materials such as Loh e Madur on which you will inscribe the talisman. 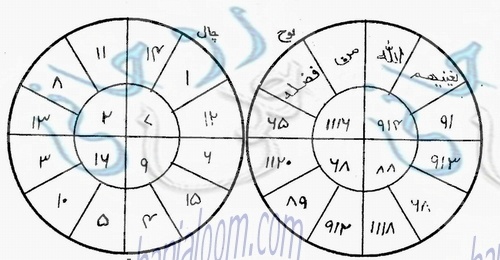 We are making the Jupiter talisman in accordance to the laws of Loh e Madur (Circular). The scholars of letters say that it is more beneficial to make circular talisman instead of a square. 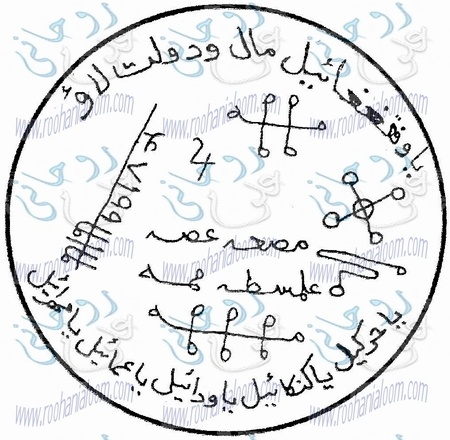 The Talisman has no particular method of start or end points of inscription. You can start from any point and can end where ever you like. While making the talisman you must burn perfumes associated to planet Jupiter in large quantity.

If you find difficulty in finding the hour of Jupiter then you can use Roohanialoom software to find Jupiter hours. You can download our software for free from this link :

You can prepare this talisman from 1 to 7 September. But the most suitable time is on 5 September because this day belongs to the planet Jupiter.

For best and fast results this talisman must be made on gold. If someone cannot afford gold then it can be made on Silver(Chandi) and a paper of gold or silver colour.

If someone is making this talisman on a paper then he must draw a square of 16 boxes. He must also fill the boxes with the corresponding colours. The first four boxes will be written with red colour. The box number five to eight must be written with blue colour. Box number nine to twelve must be in green colour and finally box number thirteen to sixteen should be in yellowish brown colour.

The talisman must be folded in 4, 8, 12, or 16 parts. Put it in a white silk and distribute sweet rice(Zarda) among kids, neighbours and relatives. Place this talisman in front of you and recite Ayat ul Kursi 70 times then put it in your neck. For 21 days recite the verse Yughni A Ho Mullaho Min Fazlehi 2186 times daily afterwards daily recite the verse for 21 times.

If you prepare this talisman according to the above mentioned procedure then it will show its positive results quickly. The above mentioned talisman does not belong to a person. Anyone who holds it will get the benefits. The holder of the talisman will spend a rich life, free of financial problems and winning lotteries.

We have explained each and every point in detail. Now it depends upon you to work hard to make this talisman.

Now we present here the second method of making Jupiter talisman. This talisman will be made for a particular person. Let us assume that we are making this talisman for a person named Muhammad Hassan. For this particular talisman we need numerical values of the following:

You can see here the final talisman. 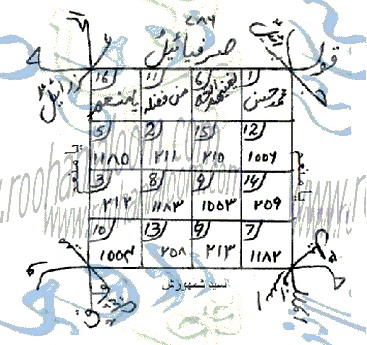 The numeric values, name of the person along with Quran verse and ALLAH Name will be placed in the talisman in four steps.

In third step we will add values to the box number 9,10,11 and 12. For this we will take the numeric value of Min Fazlehi which is 1005. We subtract 2 as per law from this value. Place 1003 in box number nine. In box number ten 1004 will be written. Then write part of the verse Min Falehi in box number eleven and in box number twelve put value of 1006.

Kindly note the total of talisman from each side must be same. As per our example the total is 2607.

At the back of the talisman inscribe this image: 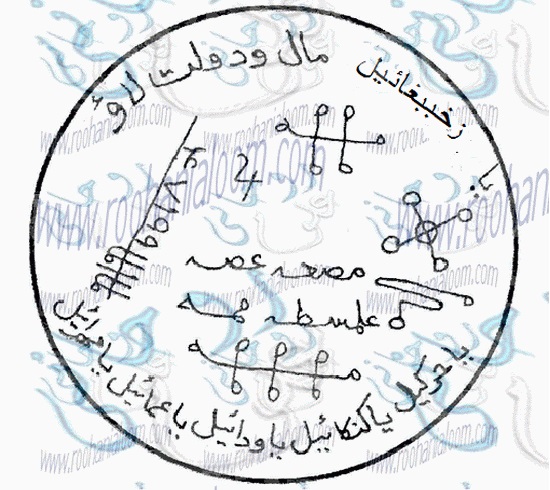 You have to make new Moakal for this special talisman and write Eil and the end of the name Mokal extracted. Our total for this is talisman is 2607. The letters for this value are :

This talisman will be made on pure gold, silver or on paper. The talisman made on gold shows fast and effective results. If you are making the talisman on a paper then you must fill all boxes with four different colours of ink as mentioned earlier.

Those who know method of Takhjim must perform it on the talisman for seven days. Place the talisman in a piece of cloth only on the day of Friday and then keep it with you.

We have tried our best to explain this world famous talisman in easy way.

If you cannot make this talisman or unable to find a suitable person to make it for you then you can obtain the talisman from our institution for a Hadia.