It will be impossible for human community to have a life without numbers. Human life is divided into various numbers. From age to working hours, clocks to schedules, money in the wallet to the stock exchange. From complex formulas of chemistry, physics and mathematics to weight scales in a shop. Human are always dependent on numbers.

When we study ancient civilizations we come to know that certain numbers were considered sacred. The Maya and Egyptian considered some numbers holy or magical. Renowned Greek philosopher Pythagoras said that “The world is built upon the power of numbers”.

The role of numbers in the creation of the universe has been mentioned in the Holy Quran. The verse number 28 of Surah Al Jinn states that ‘’everything has been covered in numbers’’.

In human history numbers became a source of divination and magic. If we look around we find that the entire universe is composed of mathematical codes. Every creation is an example of numbers. Human body is a complete example of numbers such as 1,2 and 5.

Apart from this, other matters linked to human life can be expressed in numbers including names, words, birth dates and birthplaces to foresee a person future and his personality. Numbers also have strongest connection with vibrations of the universe.

Such pairs of numbers are called amicable numbers. Due to this chemistry these numbers attract each other and create strong relation.

The few pairs of amicable numbers are: (220, 284), (1184, 1210), (2620, 2924), (5020, 5564), (6232, 6368). Thabit Ibn e Qurra, an Iraqi mathematician was the first person who wrote about the formula of amicable numbers. The other Arab personalities who have worked on these numbers include famous Arab astronomer Maslama Al Majriti, Al Khatib Al Baghdadi and Al Farsi. In western world the Greek philosopher Pythagoras and his students brought mystical properties to amicable numbers.

It is said that the Greek philosopher and mathematician Plato called amicable numbers as Magnetic Heart due to the powers hidden in these numbers to attract hearts. The amicable numbers attract the heart of the opposite as magnet pulls the iron towards itself.

Some scholars associate number 220 to planet Venus and 284 to planet Mercury.

The numbers 220 and 284 are well known for their magical powers. From hundreds of year spiritualists, astrologers and occult masters are using these numbers to make talismans and amulets. In our modern world few are making the talismans and amulets with amicable numbers as it was made very complex to understand the process of talisman making with these numbers. Following the footsteps of elders, present day maestros believe that amicable numbers have great power to create special ties between individuals that can last forever. The amicable numbers can also be used in attracting wealth.

The talisman and amulet presented here can be made for love and wealth. It is a human nature that he is attracted to something that he lacks. The other reason for attraction is the similarity between two individuals. The problem occurs when a person is attracted to someone who has nothing in common. Their likes, dislikes and their physical appearance belong to opposite directions. But one of them is so attracted to these opposites that he or she wants to win that person at any cost so that they can spend life together. In these types of cases the amicable numbers love talisman and amulet helps the lover to make his beloved to be in love with him or her forever.

The amicable numbers talisman and amulet can be made when planet Venus is exalted or Venus is in Libra or Taurus. At this moment if the planet Sun is also exalted the talisman will show its effects fast. The other aspect in which this talisman can be made is the Trine and Sextile of planet Venus and planet Mars as love and feminine is associated to Venus and masculinity to Mars.

The total of lover, beloved and word Jalb e Qalb is 1951. The higher number as per the table is pair number three which is 2620 and 2924. Please take the value of both person names along with word Jalb e Qalb. If the total of this is less than 220 then we will take the first pair of amicable numbers to make an amulet. If this total is greater than 220 then check from the table under which pair this total comes. Our total is less than the third pair رک which is 2620 and higher than the first and second pair which is respectively 220 and 1184 therefore we will take the third pair for our amulet.

We will prepare two amulets. The first amulet will be for lover and the second will be for the beloved. For lover amulet we have taken the value 2620 which comes under رک column for pair number three. For beloved we will take the corresponding value which is 2924 under رفد column.

We will take the value of word رک from third pair which is 2620. We will subtract the total of names and Jalb e Qalb 1951 from 2620. After subtraction we get a new value of 669. We make a box of 4×4 and fill the values as per the method of ‘Square Samdia’. The amulet will be made in four steps.

This talisman belongs to lover. He or she will tie this talisman to a tree hanging in the air.

The lover amulet with template to fill values and names is given here: 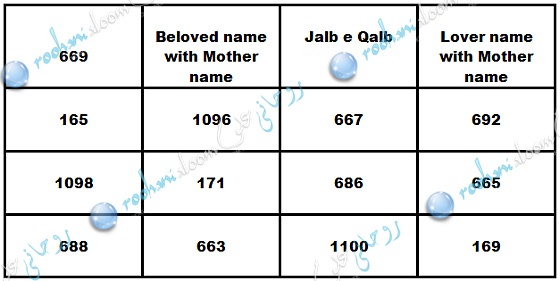 Template To Make The Talisman

We will prepare another talisman. The procedure to make the second talisman is same as of first talisman. The only difference is that instead of رک value from third pair we will take value of رفد. The value of word رفد of third pair is 2924.

The second talisman is called beloved talisman. We present it here in final form: 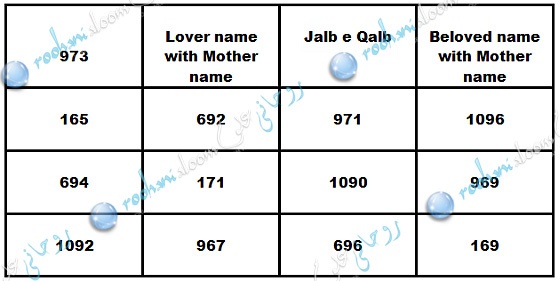 The lover will keep this talisman tied to right arm or can wear in the neck. For fast results make sure that the boxes size of each row and column is same for both talisman.

We have tested amicable numbers talismans and amulets for attracting love and winning the heart of the opposite with great success.

This talisman can also be made when two planets Moon, Venus and Jupiter are making favourable aspects to each other. The Moon must be in trine or sextile. These planets must be in strong positive in different zodiac signs.