When we look at the formation of the human society we come to know that no one is living an individual life. The action of an individual is putting effects on the lives of other people. We can understand it from an example of our daily. If the owner of a local grocery store increases the price of an item it will effect every member living in the area. On the larger scale if the ruler of a country brings some change to something every person in the country will be effected.

The same situation is applied on a family. Family is the combination of various individuals. Every individual has the right to take actions as per his choice in his life. His actions do bring changes into the life of other family members. The action of one person can make or break entire family.

A human has an emotional nature. He performs many deeds under the influence of temporary emotions. Every human action conceals positive and negative results which are revealed after a period of short time. Many think that a certain decision of their life is their personal matter and no other member of their family or society has nothing to do with it. The decisions taken under this type of attitude often bring disaster for a family. They end up in distance, broken relations and defame.

Some emotions overtake a person. He is so much influenced by these emotions that he loses his sense and take such actions resulting in the bad name and bitter words from the society. The words of advice are of no use to this person. It seems that he is intoxicated by his emotions. We can find many stories where the act of an individual brought shame and destruction to the family. The price of his actions was paid by innocent family members.

The union of two persons can be very beneficial for a family and on the other hand this union can bring harm. On the Conjunction of Sun and Saturn we are presenting a talisman that is very powerful in its effects. The talisman can be used where the union of two persons is bringing defame for a family. As love is essential for a relation similarly hatred is necessary to break relations. The talisman brings feelings of disliking that helps in breaking a relation.

Human history tells us the story of two persons who known as the symbol first hatred in human race. This hatred resulted in the murder of one of them. They were the two sons of Prophet Adam a.s. and their names were Qabeil and Habeil(Cain and Abel). Almost every religion mentions their names. They are known as the symbol of first murder. The Holy Quran and Hebrew Bible narrate the same details of this cruel incident Qabeil and Habeil. 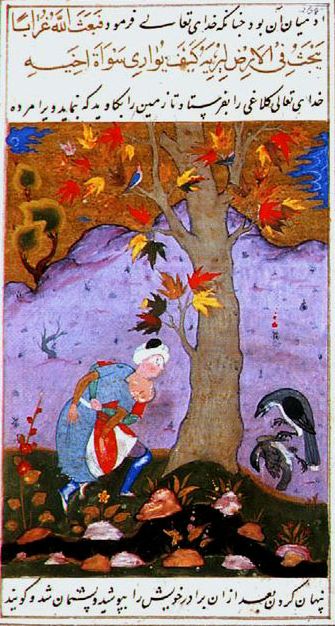 The grave of Habeil can be found in Syria in the Zabdani area. The grave is located inside a mosque which was built by Ottoman ruler Wali Ahed Pasha in 1599. Many people come to visit the grave. 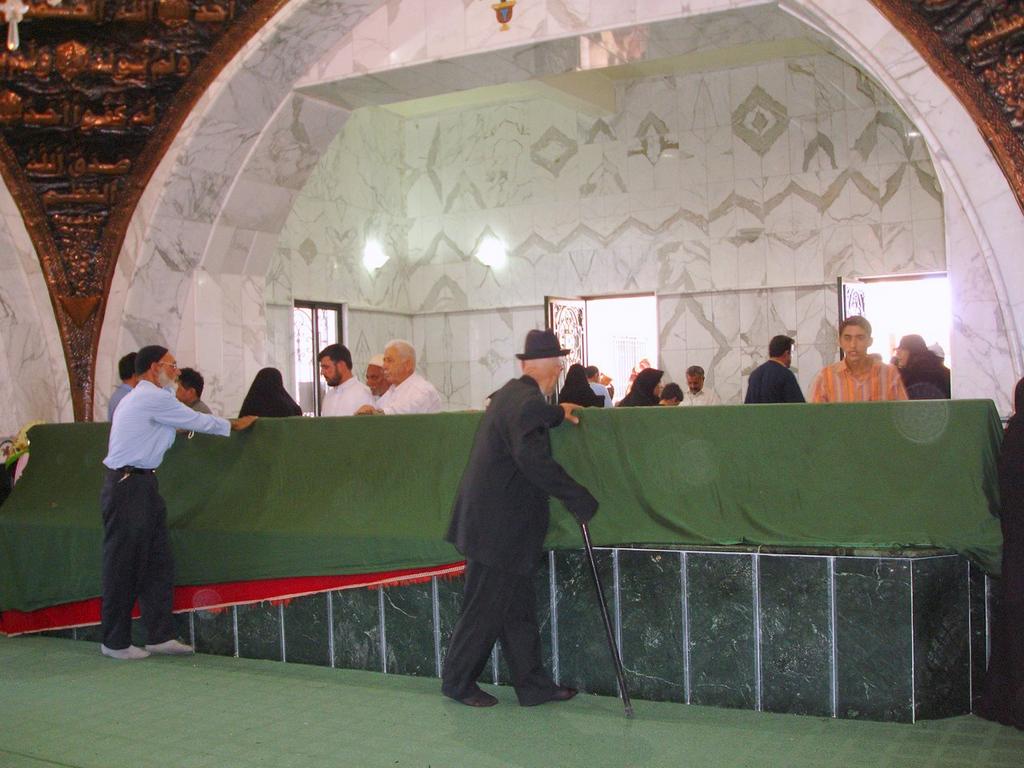 Often people are confused about the story of Qabeil and Habeil that who was the killer and was killed. The answer is simple. The word Qatil(قاتل) starts with letter ق so the name of the killer must be started with the letter ق thus the killer is Qabeil قابیل.

The masters of spirituality have been using these two names to break a relation which is bringing defame and harm to a family. We are presenting the method with an example.

In our example we have two names Junaid and Rabi. One of their family wants to break their relation for above mentioned reasons. We will take the numerical value name of elder person along with his/her mother name with Qabeil and the value for the name of younger person with his/her mother name with Habeil. In our case Junaid is elder than Rabi therefore his name will be added with Qabeil and Rabi name will be added with Habeil.

We will make three talismans of 3×3 format with earth element(Musalas Khaki). The word ‘’اجھزط’’ will be written at top of each talisman. We will also use the verse ”والقینا بینھم العداوۃ و البغضاء الی یوم القیامۃ” from Holy Quran. The talisman will be made as per the principles of Dhulkitabat. As Junaid is elder therefore we will take numeric values of his name, his mother name and Qabeil. The details are given here:

The talisman in its final shape is given below:

The talisman will be made as per Musalas Khaki template which is also given here: 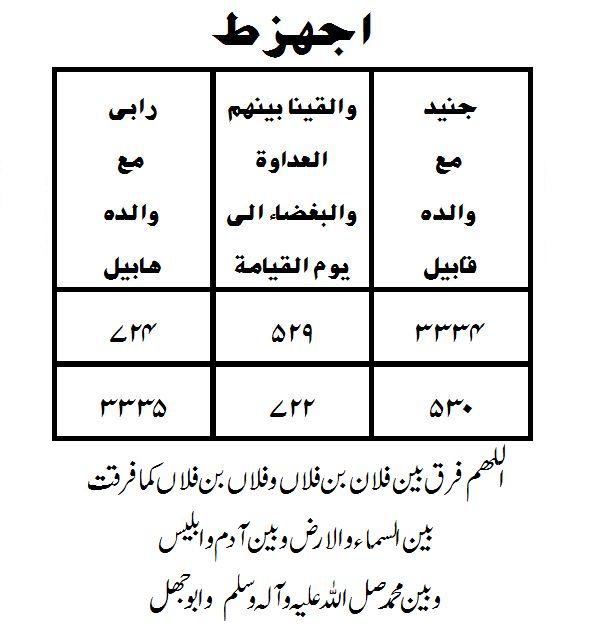 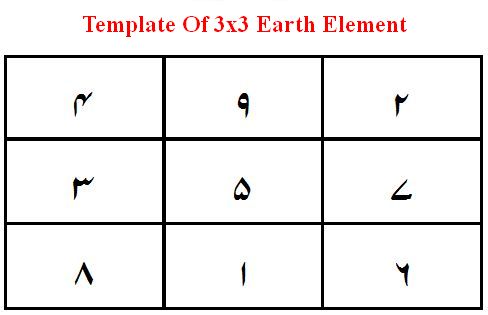 The first par is based on box number one to three. The second part is consisted of box number four to six and the third part from box number seven to nine.

When three talismans are ready keep them at save place. On coming Saturday, 12 at noon place one talisman in a broken plate of china clay and burry it in a graveyard or barren land. Burry one talisman in the path of first person and other in the path of second person. After few days they will start disliking and will break their relation forever.