Before presenting talisman related to Jupiter dignity we would like to highlight some benefits of this planet. According to gurus of astrology and spirituality planet Jupiter is the lord of worldly possessions, wealth, money, increase in finances and elevation to high ranks. Jupiter is also associated with spirituality.

A person under debt or unemployed for years can benefit from this event. All pain staking financial crisis can be turned into prosperity with the powers of Jupiter.

With the passage of time every human needs a satisfactory flow of finances to meet his requirements and to spend a comfortable life. Nature has blessed planet Jupiter to bring financial stability, easy flow of wealth, opening the doors for promotions in every field of life and to bring wealth from unseen sources.

Modern world has given new horizons to earn wealth. Online trading, forex, lottery, and prize bond are new ways to make money. Jupiter has the power to enable a person to increase his wealth through these areas.

Gambling, bingo, lotto, etc are legal in some countries. We see large lines in front of lottery shops especially on Christmas and New Year. Very few are lucky to win. Those are trying their luck for years but face failure can increase their chances of winning with Jupiter talisman.

The planet Jupiter was in exalt from 27th June 2013 till 1st September 2013. The planet Jupiter is exalted after a period of 12 years. Jupiter exalt starts when it enters in Cancer. Cancer is the exalt
zodiac for Jupiter. Exalt of a planet is known as the most benefic point to make different talisman and other spiritual products during this period. If someone has missed this time then he can benefit from the Dignity of the planet. Dignity is most auspicious state of a planet after exalt. When planet Jupiter reaches 2 degree of Libra it is blessed with dignity. Many spiritualists perform various courses to achieve high powers in spirituality.

Those who were unable to bless themselves during Jupiter exalt can now benefit from its dignity. The planet Jupiter will be dignified from 14th September 2016 at 8:23 in the morning till 19th September 2016.

Time never waits for us. We have to utilise the time in the way to receive best for the life.

Jupiter is associated with Sagittarius and Pisces. Its day is Thursday and it is the lord of the sixth sky. Various talisman, amulets and other spiritual items can be made during exalt and dignity of the Jupiter. All these will be made during the hour of Jupiter.

The talisman presented here is associated to planet Jupiter. It is very famous for Jupiter talisman. It has been written by various famous personalities in spiritual world including late Kaash Al Barni. We provide here useful information so that everyone can prepare the Jupiter talisman. If you act according instructions given then you will have a greatest tool in your hand.

You can perform the recitation without any specific restrictions of spirituality.

This Jupiter talisman holds powers of a particular part of verse of Surah Al Noor of Holy Quran. The verse 33 is used for the talisman. You also have recite this part for 125,000. The verse part includes یغنیھم اللہ من فضلہ . Its recitation should be started from Thursday and must be finished in 7,21 or 40 days as per your convenience.

The recitation of Darood Sharif for 125,000 is enough to make the talisman but is you recite other two then it will give an extra powers to the talisman.

We present two talismans for our readers. One talisman is for general purpose. Anyone can use it. The second is talisman is specially made for a particular person.

During the dignity time at the Jupiter hour you have engrave the talisman on the metal by following the template. According to the masters it is better to make round talisman during exalt and dignity of a planet for greatest results due to this reason we are also making a round talisman. On the other side you will inscribe the Jupiter talisman. We give final talisman here: 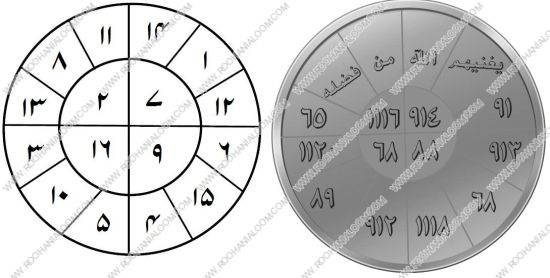 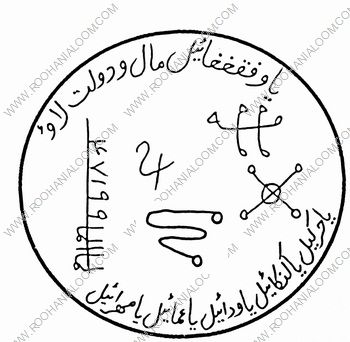 Numeric value of the یغنیھم اللہ من فضلہ is 2186 and its Servient(Moakal) name is و ف ق غ غ : وفقغغائیل .

Names of other Servients(Moakals) associated to this talisman to attract wealth are given here: 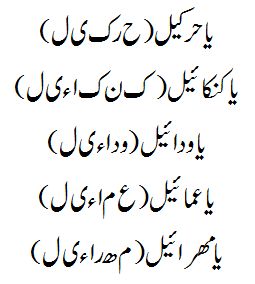 The backside talisman does not have any specific template. You inscribe any symbol first.

For highest results and effects we strongly recommend to make the talisman on pure gold. If someone cannot afford, then it can be made on mixed metals or pure silver. If you wish to make the talisman on white paper, then use ink of four colours. The talisman is based on 16 boxes. Box number 1 to 4 four will be written with Red Ink. Box number 5 to 8 will be written in Blue Ink. For box number 9 to 12 we will use Green Ink and for box 13 to 16 we will use Yellow colour ink.

The paper talisman has a typical folding method. It will be folded only in 4,8,12 and 16 order. Stitch the amulet in a piece of silk cloth.

Select a room or place where no one can come during the making of talisman. Make sure to wear rose perfume and room is filled with the aroma of Jupiter incense. Once you have finished the talisman distribute sweet cooked rise(Zarda) among elders, children and neighbours. Sweet rice must be cooked before sitting for talisman.

Keep reciting the part of the verse یغنیھم اللہ من فضلہ for 21 days. If you have the time it should be recited for 2186 times daily for 21 days and if you have recited the verse for 125,000 times as per method mentioned earlier then you can recite the verse for 21 times only.

The talisman presented above is for general public. Anyone can use it as it does not include any name of a person. The talisman will show its great effects to the wearer and he will spend a happy and luxurious life.

The talisman is given great divine powers. It is a very effective tool to attract wealth, increase in income, availability of wealth from unseen sources, respect in the society, winning money through lottery and prize bonds.

We have elaborated the entire process and have not kept anything secret. We have spent a great time in providing you this useful information. It will also take your time to make the talisman. You have to work hard on it. The final results are in the hands of ALLAH and HE always blesses the person who works hard.

Each and every talisman and amulet is a special method of pray to Almighty ALLAH to shower HIS blessings on us.

If you are confident that you can make this talisman then you must try it during Jupiter dignity. This is a rare opportunity to fill life with joy, happiness, wealth and luxury. If you cannot make it by yourself then you can ask any person who has its knowledge or you can obtain the talisman from us.

Second Jupiter Talisman For A Person:

Now we present the second method of Jupiter talisman which is for a particular person. In our example we are making the talisman for a person named Mohammad Hassan.

The total of each row of the talisman will be 2607.

On the back side of the talisman you have to engrave the Jupiter image. The name of servient(Moakal) will be changed. The Moakal name will be derived from the total value. In our example the total value is 2607. The letters obtained for this value are ز خ ب غ . Add these words at the end of these letters ایئل and combine them زخبغائیل .

The talisman will be made on gold, mixed metals, pure silver and paper. The talisman made on gold will show quick effects. The talisman on paper will be made with four colour ink as mentioned earlier. Place the talisman at a safe place and daily perform TANJEEM for seven days. When the Tanjeem process is over stitch it in piece of cloth on Friday and wear it. Please note that the stitching and wearing will be done only on Friday. 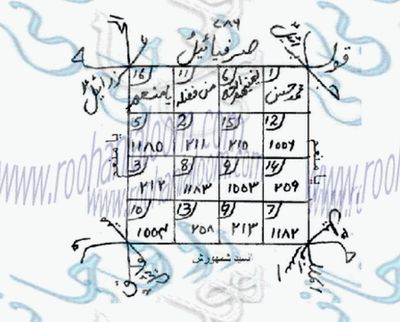 The following image of Jupiter will be engraved at the back of the talisman: 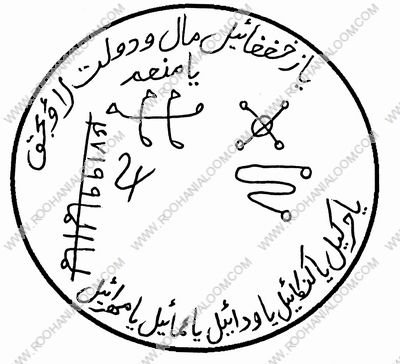 We have done our best to explain the method is easiest way. Hope you will find it helpful to make talisman for you and others.

At this auspicious time our institution is also making general and particular talisman for planet Jupiter. Wishful person can contact us before times.