The planet Mercury is exalted at 15 degree of Virgo. Mercury will achieve exaltation on 13 Sept. 2018 at 19:07 and remain exalted till 14 Sept. 2018 at 07:43 as per Pakistan standard time. Various talismans, amulets and other spiritual items can be made during this event. While making these things make sure to check the current position of planet Moon and Venus and take suitable remedies.

Spiritualists say that Mercury plays a great role in winning the hearts of writers, to sharpen memory, it brings success in exams and debates. It sets path for those who are interested in higher studies. Being the ruler of communication one can conquer public through their speech such as politician. With the passage of time the education is becoming more and more difficult for children. Mercury is very helpful in igniting the passion for education in children.  Mercury brings sharpness of mind to obtuse children.

Mercury governs education, transport, foreign travels, short journey, messages including texting, facebook, tweeting, email and phone calls and all sorts of social media. It is the lord of communication skills, writing and journalism. Professionals such as television hosts, news, magazine and novel writes can achieve great benefits from Mercury.

Mercury removes all sorts of fears especially in dreams. Mercury talismans are known for protection and termination of black magic.

With the power of Mercury a person can get due  promotions and also a journey for promotions begins. If someone has been expelled then Mercury can help him/her to get his job back.

Sexual harassment is the product of modern living. There are is a great increase in sexual harassment incidents. Employees are being sexually harassed by their superiors. Mercury provides great protection in this matter.

We are living in a world which is combination of good and evil. People face many legal issues in day to day life. Sometimes it happens that an innocent is being charged or convicted.  Mercury protects from these incidents.

Mercury gives success in higher studies and getting an outstanding position in a particular exam. Mercury removes all hurdles in fulfilling a wish.

At this auspicious event of Mercury exalt we are presenting various talismans and amulets. If you follow the instructions provided in the article then you will be able to make these items with ease.

A list of talismans and amulets is given here. You can click on each tag to directly read the details:

The first talisman is for those who have been sacked from their job. It will also help those who often face the opposition of their superiors and bosses. The talisman will also make you a favourite person at your work place.

In this talisman we will take help from ILM UL JAFAR. Write your name along with mother name and name of the superior letter by letter in one line. Now perform method of ”Takseer Jafar”.

After takseer jafafr separate ‘’Huruf e Sawamat’’. Huruf e sawamat are letter in Arabic alphabet which do not have dots(nuqta). These 13 letters are known as Huruf e sawamat:

Now take their numeric values and add the numeric value of Surah Wal Asr 4740 to the value of Huruf e sawamat and make a talisman of 6 by 6 template. Fill values in each box as per given template.

We elaborate the talisman with an example. Suppose a person named Faisal Latif wants to win the heart of Chris so that Chris favours him at office. Kindly note that names and numbers will be written in Arabic or Urdu languages. Write both names in letters:

After performing Takseer Jafari on above letters. We get the following result: 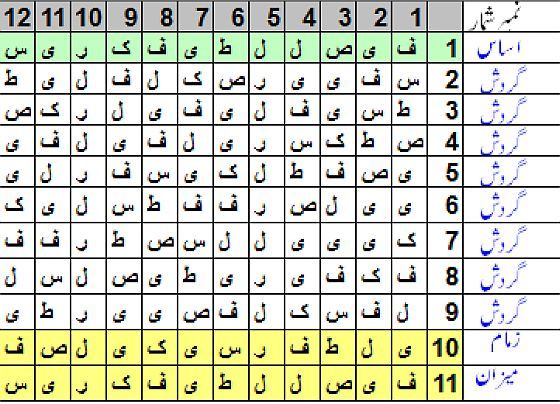 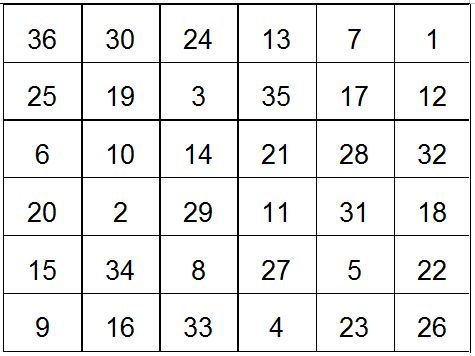 The talisman will be made on a square piece of pure silver. If you cannot make on silver then you can make in on white paper with saffron and rose water ink. With the blessings of Almighty ALLAH the talisman will show results in few days or weeks. The final talisman is given: 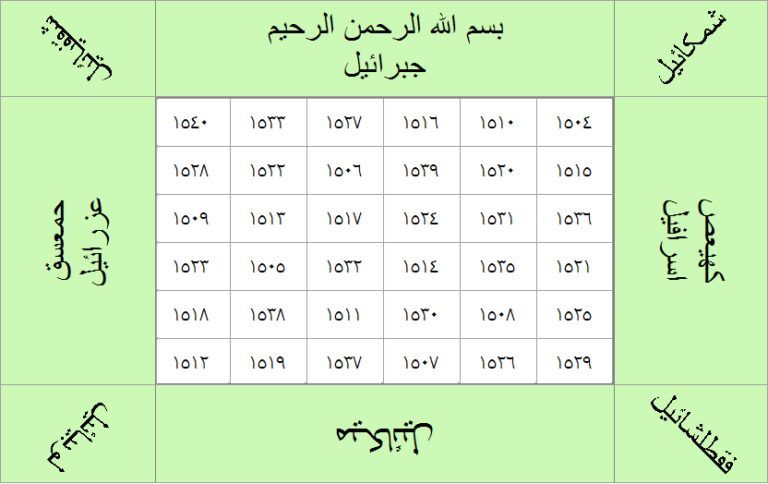 Mercury is also associated with foreign travel for job and to start a new life in another country. If someone is not getting visa or not able to get a favourable decision to settle abroad the must take advantage of Mercury powers. This Mercury talisman enables you to get visa, job and settlement in foreign. The talisman will be on a piece of silver in 4 by 4 pattern of Zul Kitabat. We present the talisman with an example so that anyone can make it with ease. We are making a talisman for a person name Azeem Hassan. We take numeric value of his name only, mother name will not be included. We will use verse of Holy Quran  ان اللہ ھو الرزاق ذو القوۃ المتین .  The numeric value of this verse is 2241.  The verse value will be divided in two parts. We will also take values for purpose which is foreign travel. The details are as :

The talisman will be made as per template given under:

The box number 5 to 8 belongs to purpose. The value of purpose is 698. We will subtract 1 from 698 as per the law therefore 697 will be written in box number five, in box number six we will write the purpose which is foreign travel بیرون ملک سفر  . In box number seven write 699 and in box number 8 write 700.

The final talisman is given here:

If an innocent person is imprisoned and no authority is will to give justice then prepare this amulet during Mercury exalt. You can make it on piece of silver or on paper with saffron and rose water ink. The amulet will be made in 6 by 6 format known as Musadas. These details are required to make this amulet:

Name of the judge or magistrate.

Name of the opposite lawyer.

Name of the person who filed the case.

It will give more power to the amulet if you put pearl in your mouth while making it and burn oodh and sandal. The format to make the amulet is give here:

An exemplary amulet and talisman is given here:

The increase in population also requires more means of transportation. From bicycle to space ship everything comes under tools of transport. We find a great increase in this business. The introduction of various taxi services such as Uber has opened new doors of employment and business.

Transport business brings good income yet it is full of risk. Accidents take place often which bring heavy financial losses. A protection can be provided in this business for growth and increase in income. Mercury transport talisman is works as protection shield against accidents and financial losses in this sector. We present here a simple and very powerful Mercury talisman.

Take numeric value of your name along with your mother name and add a value of 885 to make this talisman in 6 by 6 format as mentioned above. Write these words at the bottom of the talisman:
یا طھیال یا مکیال یا اصباوث یا اھیا. This talisman will also protect the passengers and the vehicles in which it is kept. 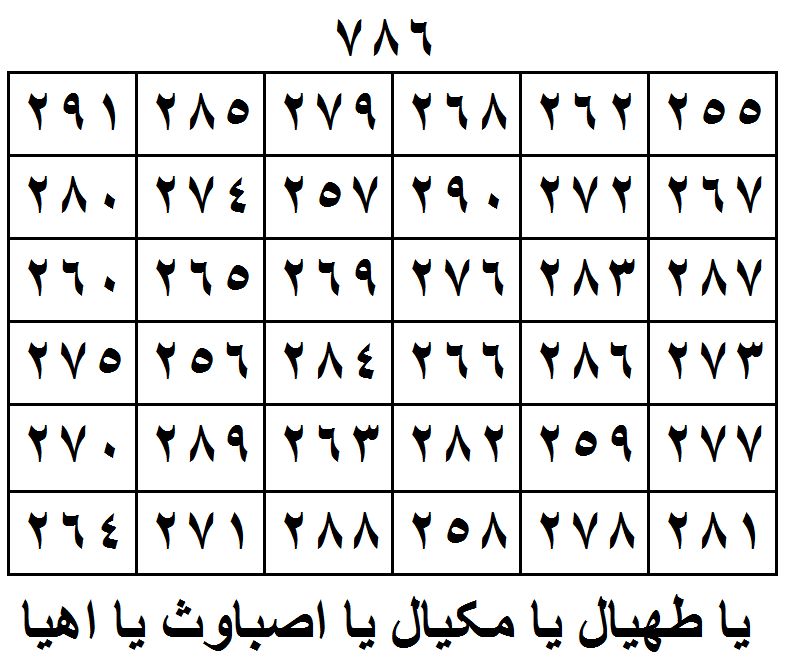 Sharp memory is a great blessing. It is hard for some people to keep a record of events in their memory. Students can also use this talisman to sharpen their memory for best results in exams. This talisman will be engraved on a piece of Silver. Put the talisman in glass of water for few minutes. Take out the talisman from the water and drink it. This exercise must be continued for 40 days without any break. After 40 days, wear it in your neck or right arm. The talisman will sharpen your memory to a great level. 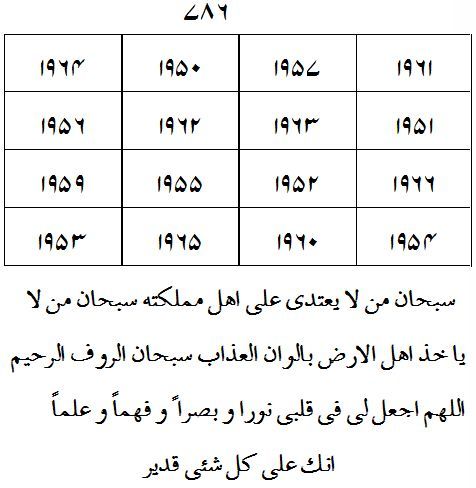 This is a best talisman for all types of mental problems. For this talisman the spiritual powers of verse Bismiallah Al Rehman Al Raheem is used. The talisman will be made on silver and will be worn by the patient. Apart from this talisman you also have to make 40 amulets with saffron and rose water ink. Daily put one amulet in a glass of water. Leave it in water for 40 minutes. Take the amulet out of the water and give this water to the patient to drink. The patient will be fully recovered in a short period of time. The talisman and 40 amulets will be made according to ‘’Tasalsul Al Daur’’ method. The talisman is given below: 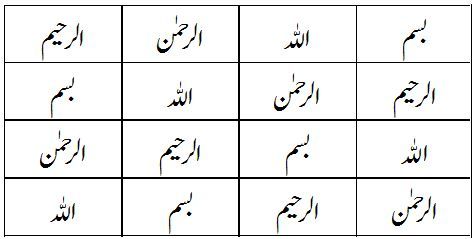 Success In A Particular Subject And Exam

If a student is trying his best to get success in a particular subject and exam but he is not getting desired results then this talisman can be prepared to achieve success in the exam with good grades. The talisman will be made on a square piece of silver in method of ‘’Zul Kitabat’’. In our example we have a student who wants success in the Human Resources subject.

The numerical value of student name with his mother name is 461. The value of Human Resources is 654. We also take values of رب یسر ولا تعسر  which is 1239 and of و تمم بالخیر 1329. The total is 3683. The talisman is also given below: 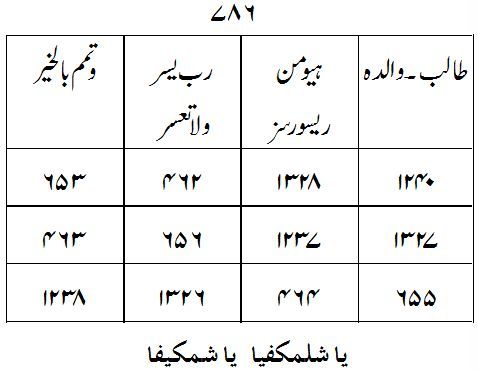 To make angels of the talisman we will subtract 41 from the total. After subtracting 41 from 3683 we get 3642. The letters for this value are ب م خ غ ج . The angel name is بمخغجائیل. We will also write the following conjuration at the bottom of the talisman:

The student must wear the talisman in his neck. With the blessings of Almighty ALLAH he will be rewarded with great success and good grades.

The planet Mercury also rules the power of speech. If a person or child is suffering any type of speech impediments then he must use this Mercury talisman to get full cure from this disorder. Similarly children who are not speaking after a normal age where a child starts to speak can also be given this talisman. 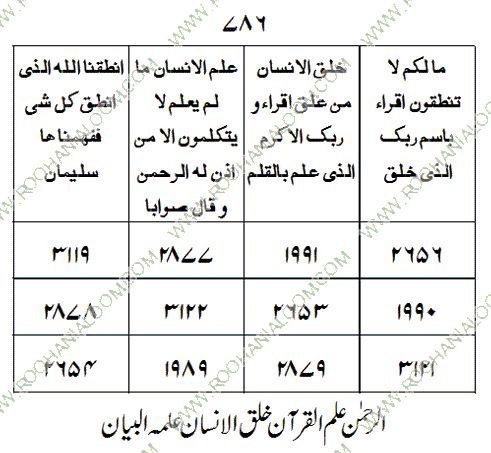 The talisman will be made as per square of Zul Kitabat. Make sure to burn the associated incense of Mercury while making the talisman. It will be of great benefit if you also make 40 amulets of same talisman on white paper with saffron and rose water ink. The amulet should be placed in the water for 20 to 30 minutes. The water will be given to the person to drink.

Accomplishing A Task Or Fulfilling A Wish

This talisman can be used to achieve a certain task or to fulfilll a certain wish. The blessed ALLAH name Al Ghayas is used in this talisman. This talisman was first written by late Shafi ud din Nizami. The talisman has shown great results. 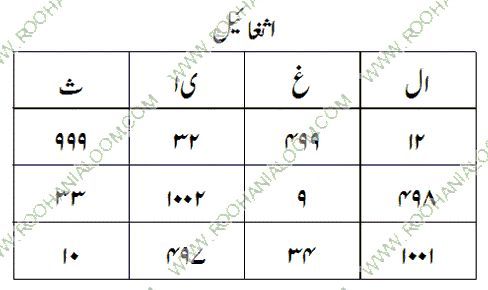 Write the name of the angel اثغائیل at the top. At the bottom write your wish or the task. If a person wants to get help in paying his debts then following sentence will be written:
Yaa ALLAH یا غیاث المستغثین arrange the payment of debts for Person name with mother name بحق الغیاث .

The talisman will be made on silver. At the back of the talisman draw an amulet of 4 by 4 with the numeric values of your name along with mother name, your purpose and suitable name of ALLAH. Daily tie the talisman at the top of your head with a string so that it does not fall down. Now recite ALLAH name Al Ghayas 1542 times for 21 days. With blessing of Almighty ALLAH you will achieve your goal and your wish will be fulfilled in these days. Once your wish is fulfilled put the talisman in the running water.