Nature created humans with the combination of fire, water, clay and air. A human is also given the appetite to excel for the best in life.  It is hunger to excel that has resulted in inventions and modernity to every field of life. If we observe closely we will find that the love is a natural element in every creation. It will not be wrong to say that every day human struggle revolves around love. This love can be to improve family status or to have a prominent place in the society.

Every human also has this dream to have a life partner with whom he can share happiness and grieves. The foundation of marriage is based on this philosophy. With time the love starts to fade away from this relation. Those who promised to hold each hand in every trouble seem miles away under one roof. There are lots of people who worship someone in their hearts but have fears of rejection if they express their feelings. If they are succeeded to enkindle their love then they face many obstacles to nurture their love. We also find lots of families where relatives do not talk to each other for years.

We are presenting here a precious spiritual method which holds prominent place for its effects in creating love and harmony. This method is well known for creating great love in marital relations. This will also help those who want to marry a particular person. Similarly this method will remove hatred among relatives and bind them in love.

Please note that both the amulets must of same size. Each and every box must of same width and height. If they are not equal then the amulets will not show their spiritual powers. We also want to mention here that if you want to marry to a particular person then the second amulet will be made for the person who is opposing this marriage so that his or her heart is melted in your favour.  The amulets will be made in square of fire element. We are giving square here so that you can prepare the amulet without any hindrance.

The amulets can be made on silver or white paper. If the amulets are made on silver then these will be placed in the warm water for few hours daily. If prepared on paper then place one amulet on the other and wear in your neck or arm. The amulets must be made on the first Thursday or Friday of every new moon.

In this spiritual method we will take help of verse no. 93 of Surah Taha from the Holy Quran. We will take only a portion of the verse which is:

As we have mentioned earlier that the amulets will be made as per the rules of Zulkitabat therefore we have to split the verse in three parts. The table for the amulet for the first person will be like this:

We will make the first amulet by taking the value of the portion of the verse  Wa Alkaita which is 547. We will subtract 1 from the value and fill the box numbers one to four. After subtraction the new value is 546. The amulet will be made as per the method of square fire element. Therefore we will place 546 in the first box. In the second box we will not put any value instead we will write the portion of the verse that we are using to fill first four boxes which is  والقیت   . In box number three 548 will be placed and in box number four the value of 549 will be written. 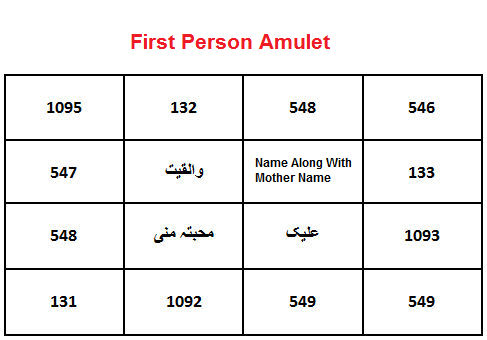 We will now prepare the second amulet. For this amulet we will take these values :

For box number nine to twelve we will take the value of the portion of the verse علی . Its value is 110. We will not subtract any value from it. We will write علی  in the ninth box. A value of 111 will be placed in the tenth box. Add one more to this total to put a value of 112 in the eleventh box. For the box number twelve we will add one more to this total and place 113 here. 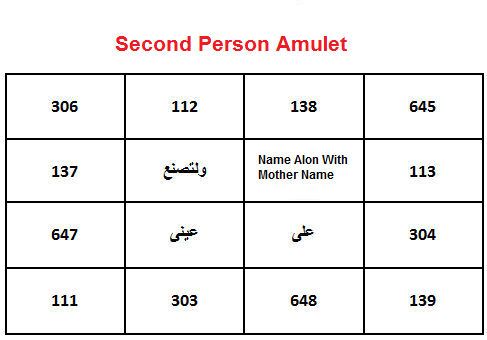 Our both amulets are prepared now.

These amulets are very popular in the world of spirituality for their great effects. If these are prepared as per the method written above then these amulets give hundred percent results.